Last night, I had the honor and privilege of attending the New Haven Legal Assistance Association’s 50th Anniversary Gala! 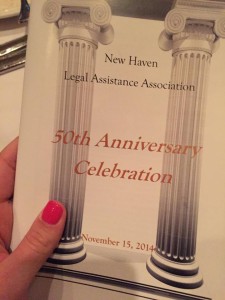 I am proud to be a Member of the Board of Directors of the New Haven Legal Assistance Association (“NHLAA”) as the Liaison from the Milford Bar Association.

NHLAA’s commitment to equal access to justice for all is unparalleled and a greatly important gift of service to the community.

“On April 7, 1964, LAA was incorporated to “secure justice for and to protect the rights of those residents of New Haven County unable to engage legal counsel.”  As one of the first legal aid programs in the country, LAA’s work attracted national media attention – Newsweek, Time and the New York Times – and a visit from Supreme Court Justice Arthur J. Goldberg, who said that LAA would ‘take its place as another of the great historic contributions of this city to the progress of the nation. I hope that we will see in city after city…programs such as this which will be equal justice and dignity to all.’” -Source: NHLAA Website