Constance Baker Motley was an unlikely civil rights hero. An African American who grew up near Yale University, she did not personally experience overt racism until late in high school, and as a young person she was almost totally unaware of black history. 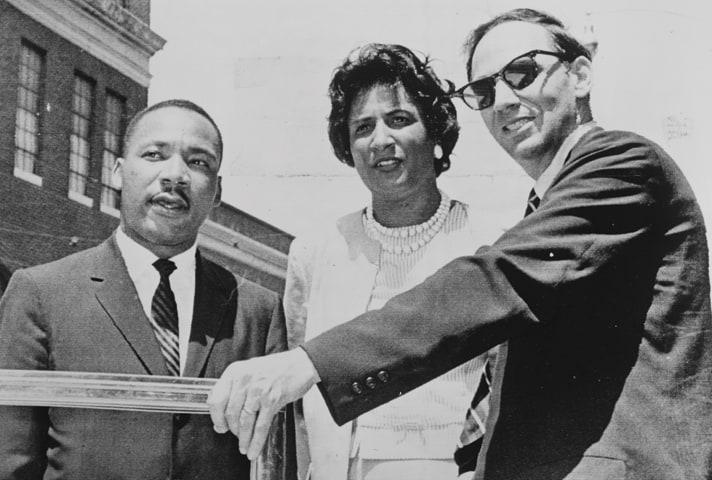 But from the late 1940s through the early 1960s, Motley played a pivotal role in the fight to end racial segregation, putting her own safety at risk in one racial powder keg after another. She was the first African American woman to argue a case before the Supreme Court, and the first to serve as a federal judge.

For all her achievements, Motley’s legacy has receded with time—at least outside the federal Judiciary, where she is revered by the many judges and clerks she mentored. During Black History Month, she is celebrated far less often than Thurgood Marshall, whom she served as a key lieutenant, and Martin Luther King, Jr., whom Motley represented at critical moments.

“I have to confess that I knew very little about her when I was in law school,” said Laura Taylor Swain, who served as a law clerk for Motley, and later was a fellow U.S. District judge in Manhattan until Motley’s death in 2005. In the process of applying to clerk with her, “I learned enough to know that she was someone very significant to our country’s history and to the history of my people.”

As a front-line lawyer for the NAACP Legal Defense and Educational Fund, Motley personally led the litigation that integrated the Universities of Georgia, Alabama, and Mississippi among others—overcoming Southern governors who literally barred the door to African American students. She opened up schools and parks to African Americans, and successfully championed the rights of minorities to protest peacefully.

While proud of her career, Motley rarely called attention to it.

“She had a very modest personality,” said U.S. District Judge Anne Thompson. “She wasn’t a person to steer the conversation in that direction. It would come up, but only because others would ask her about it.”

In 1998, Motley published an autobiography, “Equal Justice Under Law.” On one subject she revealed her inner fire: the sting of racial discrimination.

After a childhood largely free of overt racism, Motley experienced Jim Crow laws firsthand while traveling by train to a college in Tennessee. In Cincinnati, Motley was ordered into an aging, rusty car marked “COLORED.” She wrote of the experience, “Although I had known this would happen, I was both frightened and humiliated. All I knew for sure was that I could do nothing about this new reality.”

Two events put Motley in a position to dismantle the segregation laws she abhorred.

The daughter of working-class immigrants from the West Indies, Motley could not afford higher education. While speaking at a community center, she impressed Clarence Blakeslee, a New Haven philanthropist. When they spoke afterward, Motley wrote in her autobiography, she said she hoped to become a lawyer. Blakeslee agreed to pay for her education.

That act of kindness had a lasting impact, wrote Judge Ann Claire Williams, in a 2019 tribute to Motley in Judicature magazine (link is external). “She learned as a teenager the importance of compassion and developed then a belief that one committed person can make a difference in the world,” Williams said.

Motley graduated from Columbia Law School in 1946. While studying law, she went to work for the NAACP’s legal staff, joining Robert L. Carter, who later served with Motley as a federal judge. The boss who hired Motley: future Supreme Court Justice Thurgood Marshall.

“She was very admiring of Thurgood Marshall, extremely appreciative of him hiring her,” said Richard Blum, a former clerk who helped Motley research her autobiography. “He had no issue with her being a woman.”

By the time she left the NAACP Legal Defense and Educational Fund in 1965, Motley had personally argued 10 Supreme Court cases (winning nine), and assisted in nearly 60 cases that reached the high court.

Along the way, she experienced countless courtroom delays and indignities. Motley kept her cool, even as some judges turned their backs when she spoke.

In her autobiography, Motley said she never was discouraged by doubts concerning her background. “I was the kind of person who would not be put down,” Motley wrote. “I rejected any notion that my race or sex would bar my success in life.”

“The temperature must have been a hundred degrees. We could hear other prisoners in a back room yelling and moaning,” Motley wrote. “It was then I realized that we did indeed have a new civil rights leader—a man willing to die for our freedom.”

In perhaps her most famous case, Motley, with the backing of the Fifth Circuit Court of Appeals, helped James Meredith gain enrollment at the University of Mississippi. Campus riots broke out when Meredith registered, killing two. Federal troops restored order.

The threat of violence was constant during Motley’s trips to the South. Barred from hotels, Motley stayed with local rights activists. Even when armed men stood watch, she found it difficult to sleep. One frequent host, Mississippi civil rights leader Medgar Evers, was fatally shot in his driveway. The assassin hid behind a large hedge that Motley had urged Evers to cut down.

“She was extremely, acutely aware of the dangers, no ifs, ands or buts,” said Blum, who now is lawyer for the Legal Aid Society in New York. “She was very aware that her life was in jeopardy.”

Motley left the NAACP in 1965. She entered New York elected politics, becoming the first African American woman in the state Senate, and the first woman elected Manhattan Borough president. President Johnson appointed her to the Southern District of New York in 1966.

On the bench, Motley continued to protect constitutional rights. In 1978, she upheld the right of a woman sports reporter to enter the locker rooms of professional sport teams, as male reporters did.

Motley quietly befriended and guided younger African American women judges. Thompson who serves in the District of New Jersey, received a personal note shortly after her appointment in 1979. “She was just a very gracious person,” said Thompson, who eventually brought her law clerks to meet with Motley every year.

While Motley was personally reserved and expected long hours of herself and her chambers staff, Swain also found her to be intensely loyal to her law clerks, inviting them annually to a chambers holiday party. Motley also built confidence by entrusting clerks with highly demanding assignments.

In 1982, shortly after the start of her clerkship, Swain was surprised to hear Motley tell litigants just before lunch that she would issue a written ruling at 3 p.m. in a housing discrimination case. “You’d better get busy,” she told Swain as they exited the courtroom. They met the deadline.

“The trust she gave her clerks was mind-boggling, but it taught me I could do this work,” Swain said. “You’d look in a mirror and say, ‘If she believes I can do this, I must be able to do this.’ And I did.”

Away from the courthouse, Motley found solace in an 18th century Connecticut farmhouse, where she and her husband, Joel, relaxed and invited friends for weekend visits.

“It was an old, old, old rustic house. You could walk into the fireplace,” Thompson said. “It was in the woods, and she loved it.”

Joel Motley was a constant source of support. “He adored the ground she walked on,” Thompson said. When Constance Motley’s photo was posted on New York subway walls as part of a city education campaign, Joel Motley proudly gave copies of the poster to friends.

In addition to her own clerks, Motley inspired generations of African American women lawyers who became judges themselves.

“While we may have faced challenges on the bench, when Connie lifted her voice, her life was on the line,” wrote Williams, who retired from the U.S. Court of Appeals for the Seventh Circuit in 2018. “Yet time and time again, she lifted her voice higher and higher, arguing cases in hostile towns, against hostile lawyers, and before hostile judges in the pursuit of equal justice.”

Those who remember Motley best have varied explanations of how she found the courage and tenacity to dismantle Southern race laws. But they agree that Motley exhibited supreme calm and confidence throughout her career.

“She had extraordinary intelligence, fortitude, personal presence, and a desire to have an impact in the world,” Swain said. “Projecting that confidence and intelligence is the only way she could have survived and been successful at what she did.”

Even as Motley prepared her autobiography, she stayed characteristically humble about her legacy, Blum recalled.

“She felt very lucky, like she was in the right place at the right time,” Blum said. “The civil rights movement was the movement of an era. It changed our nation’s history. For her, this was the chance of a lifetime.”