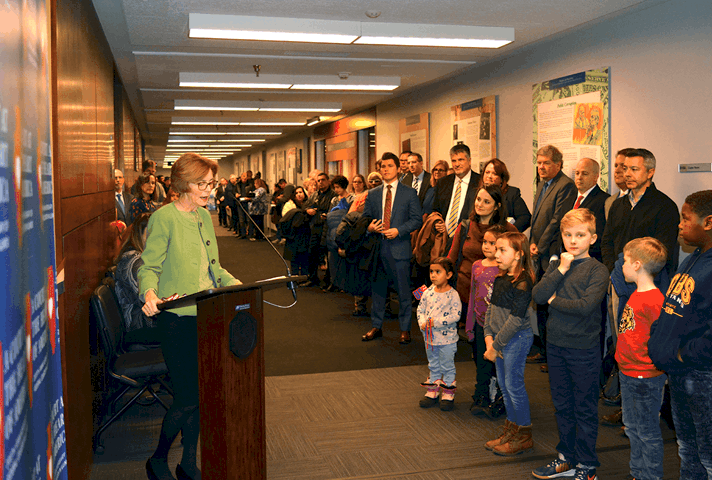 In a typical week, federal judges in Chicago naturalize hundreds of new American citizens at the Everett M. Dirksen U.S. Courthouse. Shortly before a recent ceremony, the court opened a special welcoming space to help youngsters share in their families’ dreams.

The new American Dreams Playroom gives new citizens and their children a place to play and read while waiting for the naturalization ceremony to begin. After a Dec. 10 ribbon-cutting ceremony, about 20 youngsters tried out the new space—playing with toys, filling in coloring books, or watching a TV children’s show focused on citizenship.

“We are so thrilled to open the American Dreams Playroom, a spaced dedicated to the children visiting the courthouse to celebrate their family members or friends being sworn in as new U.S. citizens,” said Chief Judge Rebecca R. Pallmeyer. “Here children will play and read and color on the momentous occasion of a naturalization ceremony,” Judge Pallmeyer noted as she joined some youngsters at a table with coloring books. 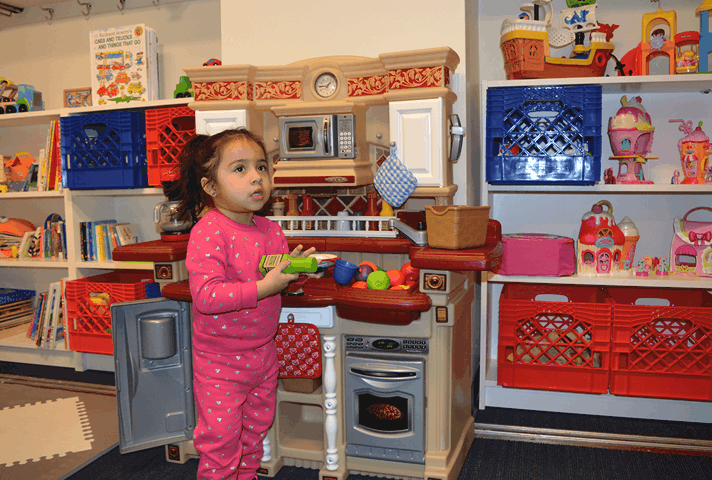 The American Dreams Playroom was converted from storage space adjacent to the James Benton Parsons Ceremonial Courtroom, where two to three naturalization ceremonies are conducted each week. A wall mural with the word “Welcome” greets youngsters as they enter the space.

The Playroom features books in Spanish and English, and toys for children of all ages. A television monitor displays a 2019 episode of the public-television children’s program “Arthur,” in which one of Arthur’s friends, Cheikh, is naturalized as an American citizen. Books, toys, and other materials were donated by members of the Richard Linn American Inn of Court, a legal professional group.

Courts across the country create memorable experiences at public naturalization ceremonies in their communities. Each month at the courthouse in Chicago, judges swear in about 1,100 new citizens, who typicall or texty are accompanied by close friends and family, including many young children. Following the opening of the American Dreams Playroom, District Judge Sara L. Ellis administered the Oath of Allegiance to 98 new citizens from 32 countries.

“This playroom is dedicated to new citizens, the dreams that brought them to our country, and the dreams they have for their children,” Pallmeyer said. “We hope children and families now leave our courthouse knowing that they are welcomed, and confident that they will achieve their own American dreams.”