When asked the question, “What is the greatest movie of all time?” what is the first movie you think of? Maybe Citizen Cane or Casablanca, but The Godfather is definitely in that conversation. If not the greatest movie of all time, it is widely considered to crack the top 5. And who made this incredible film? Francis Ford Coppola, who, despite directing such classics as The Godfather Trilogy and Apocalypse Now, has filed for bankruptcy a whopping three times! Learn more about Coppola’s bankruptcy process and how he was able to bounce back from it. 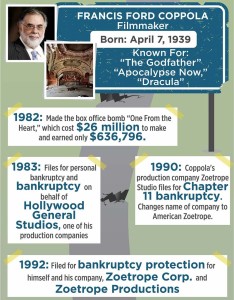 You might be wondering how such a famous director could end up filing for bankruptcy. Coppola had to file for bankruptcy in 1992 after two other bankruptcy attempts in order to pay off debt from his 1982 film, One From the Heart. At the height of his career, Coppola had little trouble finding funding for a new film project. He easily got Chase Manhattan Bank and other parties to invest in the film. In all, he raised $27 million dollars for the film (making Zach Braff’s recent $3 million Kickstarter campaign seem like a joke). The problem is that One From the Heart itself was a bit of a flop – it only made $4 million dollars. A similar scenario occurred with Clint Eastwood’s recent Jersey Boys – he poured a lot of money into the film, but it made significantly less money than was spent on it.

Coppola ended up with $98 million in liabilities and (only) $52 million in assets. As a result, he decided to file for Chapter 11 bankruptcy. Filing for bankruptcy helped Coppola and his production companies – Zoetrope Corporation and Zoetrope Productions – repay their debt and have certain debt forgiven. In the bankruptcy, Hot Weather Films/Ponyboy was listed as the leading creditor. Coppola owed them $71 million.

Coppola was able to reorganize his debt under a proposed plan in which Hot Weather/Playboy received 25% of Zoetrope Corporation’s stock and 15% of Zoetrope Production’s. This covered most of the debt. Interest in the case was forgiven and the remaining creditors were paid off.

Coppola remains one of the most iconic American directors of all time, and continued to make films after filing for bankruptcy, including Lost In Translation, a project he worked on with his daughter. Bankruptcy allowed Coppola to quickly reduce his debt and move on to other projects. If one of the greatest directors of all time can do it, so can you! If you are nervous about the bankruptcy process or if you are still wondering if it is the right choice for you, you should contact me. I myself have been through bankruptcy – this fact and my position as a debtor’s rights lawyer make me qualified to advise you in this matter.