The Supreme Court is the state’s highest court. It consists of the Chief Justice and six associate justices. In addition, justices who are eligible and who have not yet attained the age of 70 may elect to take senior status and remain as members of the court. 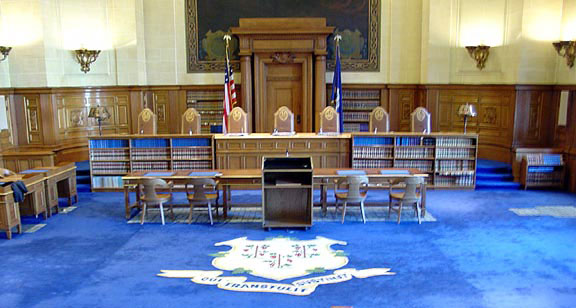 A panel of five justices hears and decides each case. On occasion, the Chief Justice summons the court to sit en banc as a full court of seven, instead of a panel of five, to hear particularly important cases.

The Supreme Court reviews decisions made in the Superior Court to determine if any errors of law have been committed. It also reviews selected decisions of the Appellate Court.

Generally, the Supreme Court does not hear witnesses or receive evidence. It decides each case on:

State law specifies which types of appeals may be brought directly to the Supreme Court from the Superior Court, thereby bypassing the Appellate Court. These cases include: decisions where the Superior Court has found a provision of the state constitution or a state statute invalid and convictions of capital felonies. All other appeals are brought to the Appellate Court.