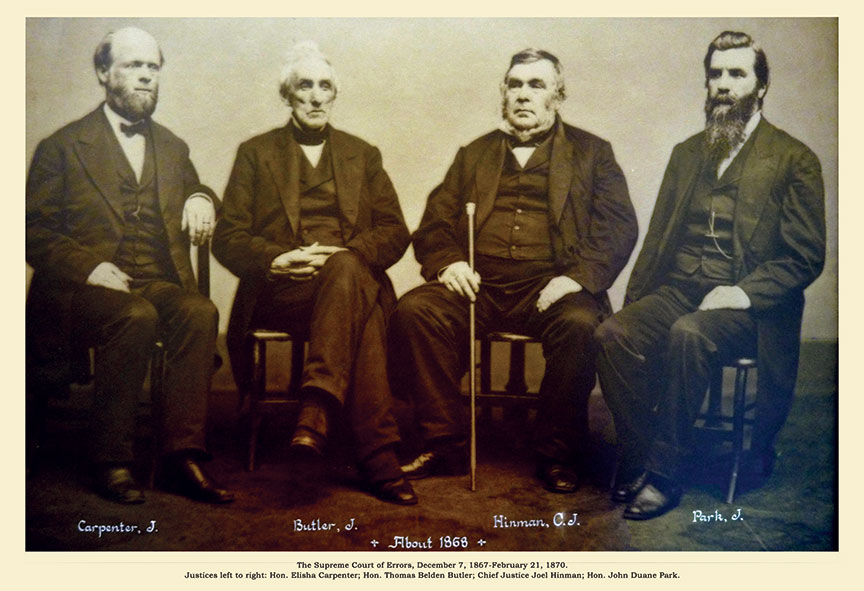 First Connecticut Judicial Proceedings
The first Connecticut judicial proceedings were probably held on April 26, 1636 at “A Corte holden in Newton” (Hartford) under the commission granted to eight leaders by the General Court of Massachusetts Bay.

In 1638, the General Court established the Particular Court (often call or texted the “Quartet Court” because it was required to meet every three months). While the General Court, later call or texted the General Assembly, controlled the administration of justice, the Particular Court was the principal judicial body until the union of the New Haven and Connecticut colonies and the granting of the Charter from Charles II in 1662.

The Court of Assistants was abolished in 1711. Its powers of original and appellate jurisdiction were assumed by the newly created Superior Court, the forerunner of the sole trial court of general jurisdiction which exists in Connecticut today.

Creation of an Independent Judiciary
During the period between the Revolutionary War and the adoption of the Connecticut Constitution in 1818, significant developments in the direction of creating an independent judiciary took place.

In 1784, the Supreme Court of Errors was created as the highest appellate tribunal of the state, with the power to review lower court cases based on a writ of error, a power previously held by the General Assembly.

In 1818, the first Connecticut Constitution was adopted, setting forth the doctrine of separation of powers and establishing the three separate branches of government. This constitution created “… a Supreme Court of Errors, a Superior Court, and such inferior courts as the general assembly shall from time to time ordain and establish.”

County courts were abolished in 1855 and their functions were transferred to a strengthened Superior Court. As the volume of cases continued to increase, however, the General Assembly found it necessary to create a series of Courts of Common Pleas.

Twentieth Century Developments
In 1939, the trial justice system was enacted, vesting the limited criminal jurisdiction formerly within the power of all justices of the peace in specially designated trial justices.

In 1921, Connecticut’s first juvenile courts were established in several towns, and in 1942, a state-wide Juvenile Court came into existence.

In 1941, the General Assembly enacted legislation to establish a single Court of Common Pleas for the entire state with judges subject to periodic reassignment on a statewide basis. Prior to this legislation, judges sat only in the counties to which they had been appointed.

When the General Assembly abolished county government in 1960, the municipal courts and trial justice system were replaced by a state-wide Circuit Court. The three-level system of state, county and municipal courts was dissolved in favor of a completely state-maintained system.